The Gift Of Life: 10 Years In The Rearview Mirror

Ten years ago today was undoubtedly the longest day of my life. It didn't help that the night before was riddled with interruptions galore by several groups of medical staff trying to get an IV into a baby - causing her to cry and scream throughout the night. A night I felt so incredibly powerless to help soothe my baby, nor felt strong enough to tell them where to take their IV and shove it.  At that juncture, I didn't yet know I could dictate action, or tell them to stop. Ten years ago today, our Cardiothoracic surgeon/hero, Dr. Stephen Langley and his team, worked to fix the defects in my 13 week old baby's heart. It was her fourth surgery and absolutely her most critical.

Andi was enduring congestive heart failure pretty much since birth.  Her heart was working so hard, and yet causing so many problems, that she would've died had they not gone in at such a small, frail time to make the necessary repairs. Andi needed a Complete AV Canal - a complicated repair.

A large hole in center of the heart affecting all four chambers where they would normally be divided. When a heart is properly divided, the oxygen-rich blood from the lungs does not mix with the oxygen-poor blood from the body. A CAVC allows blood to mix and the chambers and valves to not properly route the blood to each station of circulation.

Andi had a hole in her upper chamber, a hole in her lower chamber, and one large valve that needed to be turned into two small valves. The surgery would take all day and she would be on ECMO - a machine that sustained life, while they repaired her heart.

Our favorite nurse from the hospital floor we spent most of the previous four months stopped by to wish us luck the morning of surgery, Misti.  Since we hated our night nurse who insisted on torturing Andi the night before, we asked her if she would escort Andi to pre-op.  One of the first times we as parents, learned we could call the shots.  Misti whole-heartedly obliged and said not to worry, that she would take care of it.  We felt much more comfortable having her walk with us behind Andi's crib as they rolled her through several white-walled hallways, under what felt like severe bright lights. A labyrinth of white on white.

When we got into the pre-op room, we were met by her anesthesiologist, Dr. Woodward. This was his second time working on Andi, as he also handled her on her first surgery - bilateral choanal atresia. He asked how she was doing and we said that she was exhausted from being tortured all night as they tried to get an IV in her. He slammed his hand down on the counter and begged, 'why do they do that?' He continued to admit that he could give her something and get that IV without issue and all of us could've headed into this big surgery more rested.  This was a big deal to me, because it further showed me that I needed to use my voice and advocate for Andi.  Here it is ten years later, and I can still envision Dr. Woodward, and hear his voice.

As we said our goodbyes, Misti walked us to the cardiology unit waiting room.  Thankfully, they did not put us in the usual waiting room, but in a private area, so we didn't have to endure the sounds of other people. They gave me a poster board, some pens, stickers, and had me capture some things about Andi.  A crafty distraction, and one I appreciated.  I remember my whole body just seemed to vibrate all day - as if I had too much coffee.  Yet, it was caused by fear and a lack of sleep. I was jumpy. I was anxious. I was more afraid than I'd ever been in my life. And despite being surrounded by family, I felt alone.  No one could say or do anything to reach me. I just had to suffer through it.

It was the longest day, and each time the nurse would call with an update, my stomach would churn. She would give an update like, 'she is sedated and intubated now.'  Appreciated, but given the situation, that nearly caused an ulcer.

I want to say they finished around 2 or 3 p.m., but I think it was even later than that, like closer to 5 p.m.  I honestly don't recall, as it was such an incredibly long day.  Dr. Langley came out to give us the update and he said she was doing well considering what she had just endured, and gave us a glimpse of what the next several days would be like... I think we all just professed our love to Dr. Langley for his work, his gift, and his efforts to repair our baby girl's heart.  I'm sure there were many tears.

Andi would be sedated for days, making it so her body could rest and recover having the least amount of work to do.  She was cold to the touch and had more machines and monitors around her than ever.  Her PICU nurse gave us the rundown of what everything was, what it was doing for Andi, and why.  I remember being completely impressed and overwhelmed by the entire scene.  The room was dedicated to the baby in the crib, and all the machines around her, and little to nothing else. There was one or two chairs off to the side. The rest of the room just worked to sustain life. I have always made a conscious decision not to share pictures of what she looked like, but here it is the tenth anniversary of that incredibly difficult day and I think that stark memory appropriate to share today. 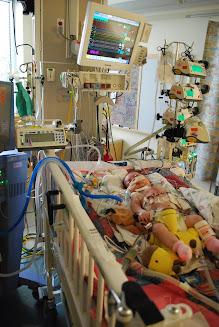 Because as strong as she is, and as much as she's been through - this surgery gifted her life. This surgery was absolutely critical to her.  We are, and forever will be humbly grateful to the many hands that worked hard to give us our baby girl back with a repaired heart that no longer was killing her. And here we are 10 years later, wow.  She just had her every-other-year cardiology check-up, her repaired valve still has a mild-to-moderate leak, but it isn't anything that is going to hurt her. Just something we will continue to monitor.  Like her cardiologist said two years ago, 'Dr. Langley couldn't have done a better job if he tried,'  Therefore, on this extra special ten year anniversary, I shout out a little louder our gratitude to Dr. Langley, Dr. Woodward, and all the other Dr's and Nurses that helped gift Andi life.  We are forever grateful and appreciative of your work and we will never forget you.
Thank you! Thank you!! Thank you!!!