Yesterday, Andi had her yearly check-up appointment with her ENT.  Less than two weeks prior, we ended up taking her to the "Doc-In-The-Box" (urgent care) in Montgomery, Alabama because her ear was draining and bleeding.  She was diagnosed with a very inflamed ear-infection and put on antibiotics and special ear drops that we happened to be out of (part of our ENT appointment was to acquire more).  Plus, it was a yearly check-up and they were to do hearing testing -- saving us a trip to the audiologist -- a whole separate appointment.  Reducing the amount of appointments, given the variety of specialists that follow Andi, #winning!  Definite no brainer, sign us up.

So, just before 6 a.m. yesterday, I instantly awoke to the sound of her throwing up in her bed, thanks to the baby monitor.  It's those parental ears I acquired at delivery, and explain why I'm chronically exhausted.  I never sleep all that deeply, because I'm the one that is always listening.  Listening to hear what I heard yesterday morning, Andi enduring stomach reflux while laying down.  See, one of the major fears is aspiration.  Kids, especially when really young, can throw up and then inhale it.  It can give them lung issues such as pneumonia, or worst case, it can kill them.  This fear was drilled into my brain when Andi was an infant in the NICU, and still drives me to sleep lightly.  I hopped out of bed to get her out of her room and into the bathroom.  I let her sit on the couch for quite awhile with her iPad, then gave her a bath, let her rest some more, and then we headed out for our appointment. She admitted she still didn't feel good, but we agreed we'd just go to the appointment, and then she could spend the rest of the day on the couch with her iPad and rest her angry belly. We were just a 1/2 mile away from the ENT's office when she started throwing up again.  Strapped into her car seat, me driving down a very busy road.  I started yelling for her to just "spit it out" -- the contents not being food, but saliva & mucous.  Not trying to be graphic or gross, but that's how you know it's reflux.  So, here I am driving down a busy street, a half of a mile away, our appointment in less than eight minutes... and Andi's throwing up all over her pretty dress.  Retching to purge the anger from her tummy.  I frantically pulled into a not-yet-open Toyota dealership, jumped out of the front and got into the back with her.  I grabbed an old hand-me-down baby blanket that I keep in the back of the truck and wiped her mouth, covered her dress, and helped her as her stomach revolted.

I honestly was transported back to the days of the G-Tube(s) and the puke-fest's we used to endure.  It made me feel upset, angry and uneasy, all over again.  I looked at Andi like I did when she was only one year old, and this used to happen.  But this time, I was anxious because I was totally unprepared for this.  It'd been so long since we've had such a stomach revolt while we were out and about.  I did not have a change of clothes.  I had nothing to wipe her down with.  I just left her covered in the blanket, turned the car around and tried to call the ENT office.  By the time I was half way home, I was finally able to reach someone to let them know what had happened, and we rescheduled for later that morning.

We returned home where Andi promptly got her 2nd bath of the day.  I added her carseat cover, dress and blanket to the next load of laundry.  She returned to relaxing on the couch with her iPad.  By 10:30, we loaded up again and headed back out to the ENT appt.  The drive was rather uneventful this time.  Andi admitted she still didn't feel well, but said she was okay to get through it.  We got to the office building, walked up - although she wanted me to carry her, and signed in at the front counter.  The waiting area was full, and full of adults.  Andi was the only kid there.  She sat next to me and wanted to cuddle up to me -- a sign.  She was lethargic, grumpy, and definitely not her usual socialite self.

While we were waiting, and Andi was clinging to my arm, the Mom-dar (Mom-radar) tickled the senses and I looked over to see her start to spit up some saliva.  I jumped up and said, 'Oh no! Hold on!  Let's go outside!'  It was quite a disruption to the zen-like office waiting area.  I grabbed my 40-lb purse and I carried her out the door.  I grabbed some tissues, and we followed an observant Fed Ex man out the door.  She started retching into the pine straw flanking the front door.  He stopped to ask, "is there anything I can do to help?"  I excused him with, 'no, thank you.  It's just reflux!' and continued, 'get it out Andi!'  It was just one of those Mom moments that might embarrass some people, but I don't give a rip.  I care about her well-being and everyone else can suck it.  So, she finishes the bout with reflux.  I tell her to sit down and run inside to get a few more tissues to help wipe her mouth.  *side note to self... pack more tissues in your 40-lb purse!*  I ran back outside and cleaned her up.  Despite being right outside the door, I tried to call the ENT office but got voicemail.  So, I picked her up and carried her back inside the ENT office.  She was exhausted, weak, and sore.  When the lady got off the phone, I was able to tell her that Andi just got sick with reflux again outside and that we weren't able to keep our revised appointment after all.  I think I apologized about 30 times and she apologized back to us about 15 times. It was another reminder of how life used to be... unsettled, frantic and unwell.  It's funny how little things can take me right back to those days where things were hard.  Things were scary. Times where we were still in the discovery stages of what Andi faced.

Needless to say, I do not miss the overabundance of laundry that the leaky g-tube/formula-fed pukefest days caused.  It was a reminder of how things used to be.  Which in turn, reminds us of how far we've come.

Today, Andi's stomach is better.  Her 'summer camp' (day care) has been notified after five of these days this summer, that her stomach does not process tomato sauce well.  So her lunch of ravioli's that was likely doused in a tomato sauce, caused this issue.  They have noted it and will make adjustments for future italian meals... hooray!  Regardless, what other girl do you know that can feel like absolute hell and still rock a supermodel look?! 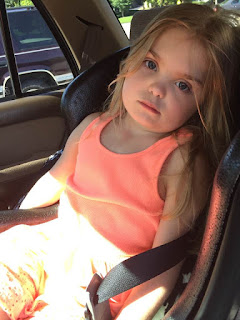