Dusting Off The Cobwebs: New York Reunion, Part One

This past weekend, Andi, her Dad and I went up to New York to celebrate my uncle's 80th birthday.  It was a massive reunion on my Mom's side of the family, all of which hadn't actually met Andi yet.  It was mind-blowing, overwhelming, and ridiculously fun.  Sitting with my cousins, it was like no time had passed since I'd seen them last, which honestly was the last century!!!  But seriously, there was an uncanny familiarity that only family and the closest of friends can provide.  It's fulfilling, calming, even healing.

My cousin Suzanne sat me down and talked to me about how much she enjoyed my writing.  She went on and on and on about how great I am, and how much she worshipped my words - that I honestly stopped listening.  I think I actually went to the beach in my mind while she proclaimed over and over, again and again how great my writing is.  What I did hear is that it almost always made her laugh.  In speaking with her, I decided to get off my ass and write again.  I'd been thinking about continuing this blog so that Andi would have a diary of sorts in which she can read about herself, our experiences, and possibly hear me and my voice, well after I'm gone.  So, here I am, choosing to restart my writing.  Let's face it, I don't get much creative release in my corporate job where honestly, the word "Brandville" makes my butt itch.  Forgive me, Werner.

So Suzanne, this one is for you.

Oh wait, ...getting back to our trip... My brother flew into JFK.  Andi and I flew into Newark.  My brother, who happens to be one of Andi's biggest fans, got in several hours earlier than we did, and took a shuttle from his airport to ours, to spare us from navigating to his.  Poor thing had to take a shuttle to the transit authority, wait in the rain for 45 minutes - thus forcing him to buy a basic black umbrella that is straight-up out of Mary Poppins -- it's curved handle resembling a hook.  By the time Andi and I claimed our suitcase, he arrived.  The three of us went to information and found out we needed to go up two fricken floors on the escalator, get on the train, to get to the rental car office.  It was a cluster of confusion for me, for reasons I don't understand.  Thankfully, my bro was there to help me figure it out.  We signed our paperwork and met my newest best friend who hooked us up with an upgrade.  I don't know what it is, but sometimes, I just happen to hit it off with people.  The person I aspire to be, pours out of me and I am the animated, fun energy that doesn't seem to make people puke.  This is one of those instances.  The youngin' (whose name I forgot as I accidentally left his card in the car when we returned it) has an 8 month old son.  This kid was adorable.  In any case, our 20 minute conversation of laughter came to a close, and we trotted off-site with Andi in her first convertible car seat.  Ha, you thought I was going to say convertible car... no... it wasn't THAT great of an upgrade!   We headed about an hour north through the nastiest, unrelenting monsoon.  I mean the wipers were on maximum speed and you still couldn't see much further than the car in front of you.  I think our fastest speed was about 40 miles an hour... it was exhausting.  3/4 of the way through the drive, my brother and I concluded... "I need a drink!"  So we stopped off at the hotel, and then promptly found ourselves a swanky pizza place where we enjoyed a "Scooby Snack" and a glass of wine, to shake off the rough road.

After which, we went back into the hotel where our reunion began with 2/3 of our cousins.  It was so cool.  We met up for prefunking in their room, where they got to interact with Andi and we all just sat around chewing the fat.  It was stellar.

After we had our initial reunion, we then all walked down the hill and hit up Applebee's, where we closed the joint down.  Well, Andi, my brother and I didn't ... oh no, we had to drive back out to EWR (Newark airport) and pick up Andi's Dad.  Although it wasn't raining nearly as hard as it was earlier, the dark, wet roads in an area of unknown is rather exhausting.  We finally arrived and drove another hour back.  I had to talk myself through those last 10 miles.  It was brutal.

We crashed hard and started the next day with a breakfast down the hill at the diner.  This place was awesome.  The food, the service, and the 15 or so people we had at our tables pushed together.

It's funny.  Thinking about how one person can pull a variety of people together for such a short time, and yet, it's this seamless unity.  It's just amazing.

After breakfast, we all felt the need to walk off some calories, so we followed Uncle Pete and the girls into the downtown district, where we walked around cruising in and out of shops.  I bought Andi a Star Wars math workbook - trying to incite some enthusiasm for math.  For myself, I bought a hardcover book at full retail price.  *shrieks of horror*  I saw a lot of things in the next store I would purchase with glee, but my senses kicked in and I decided to spare my checking account the direct hit destruction that store could've provoked.

That afternoon, we went to the official birthday party.  It was at a restaurant off the Hudson, and apparently not far from Sing Sing.  We took over the joint and it was this awesome blend of friends and family and hello... open bar!!!  It was a glorious party!  After the party, we went to Uncle Pete's house for more fun.  We were greeted by a police officer out front.  Apparently, he heard I was in town... No... there was a call about some kids in the forest... such a party pooper!!!  So, we were inside, we were outside, we ate, we drank, we talked, we laughed, and we spent way overdue time together.  It was wonderful. 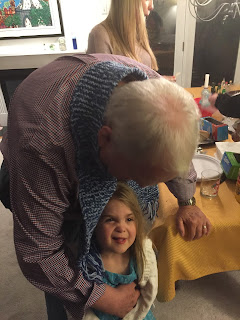 And Suzanne, dusted off the sticky cobwebs for you.  Promise to work at it more and find my voice again.  Next post, part deux:  New York City -- a six year old, over 10 miles walked and no stroller.  Fun reading ahead, I'm sure.  😃
Posted by Andi Bean at 6:29 PM